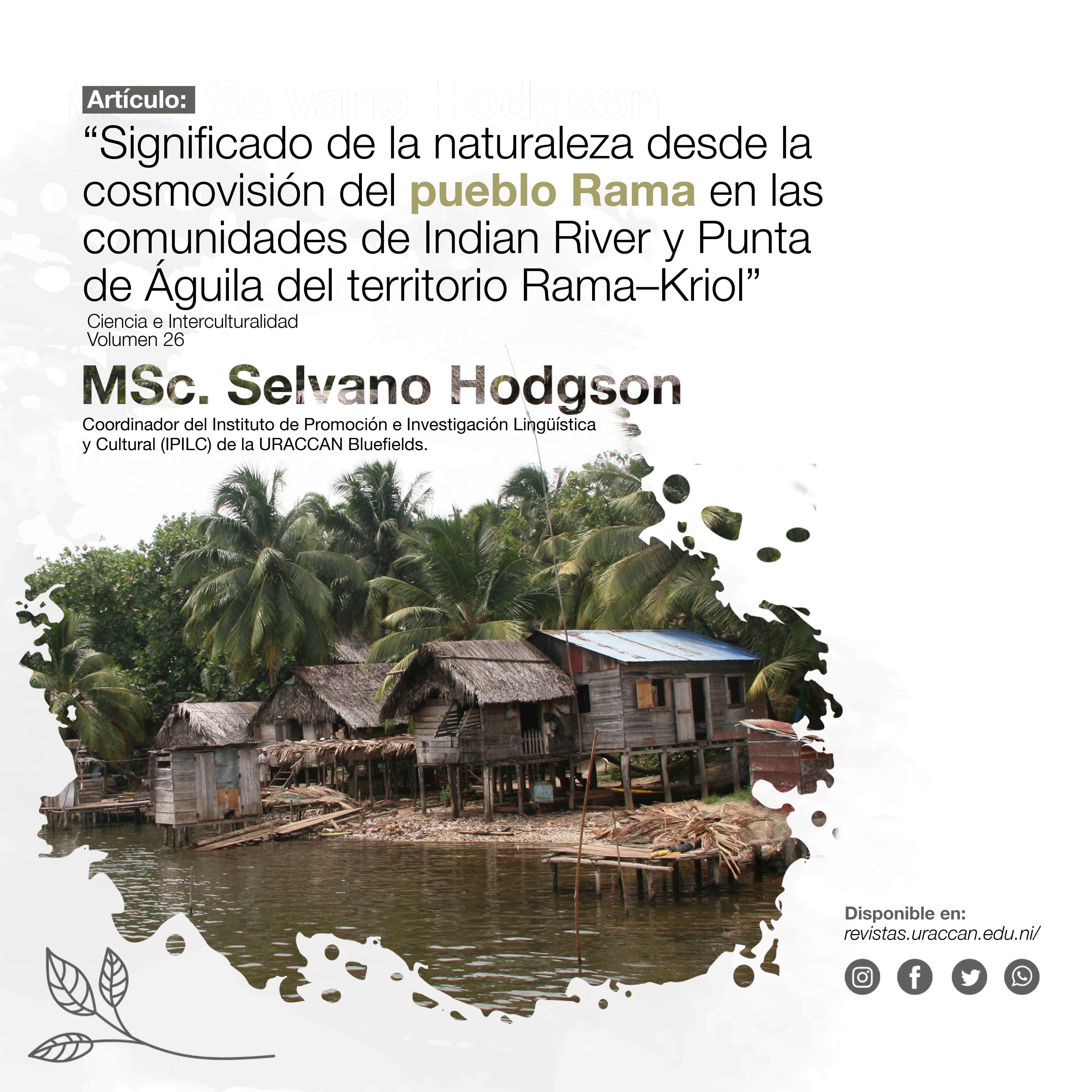 The study of the illustrious IPILC coordinator was published in the journal Science and Interculturality of URACCAN.

The author of the study is coordinator of the URACCAN Institute for Linguistic and Cultural Promotion and Research.

The MSc. Selvano Hodgson, coordinator of the Institute of Linguistic and Cultural Promotion and Research (IPILC) of the URACCAN, in the Bluefields campus, through its scientific article "Meaning of Nature from the worldview of the Rama people in the communities of Indian River and Punta de Aguila of Rama-Kriol territory" offers us a treasure trove of ancestral symbolism and rituals of the smallest people of the Caribbean Coast : the Rama ethnic group.

This article, published in the Journal of Science and Interculturality, volume 26, interprets the meaning and significance that Mother Earth embodies for that people, in two of its communities: Bangkukuk (Eagle Tip) and Indian River. Therefore, the IPILC researcher states that "indigenous branches live in the tropical forest, on the banks of rivers and in coastal areas of southeastern Nicaragua".

Nature, for the branch people, is a sacred space that gives and reproduces life, but it also grants knowledge and knowledge. Hence, according to Master Hodgson, who is a member of the Rama people and who bear his language, he states that the worldview of this people is based on his experiences and forms of relationship with the natural environment and the sacrality attributed to it.

This study, while allowing readers to know first-hand the worldview of the Rama people, in the titanic effort to revitalize their culture, traditions and language, is a proposal "for the incorporation of these cultural values into the bilingual Intercultural Education curriculum" of URACCAN.

Research process: Cultivation and Breeding of Wisdom and Knowledge

The investigative methodology applied by Professor Hodgson in his revealing study was the CCRISAC (Culture and Breeding of Wisdoms and Knowledge), which promotes URACCAN as a way of vindicating the philosophy of life of the original peoples, without imposing Western schemes on them.

In the light of CCRISAC, communities are subjects of research, participate in the process of knowledge building and the researcher must live the deep experience of the territory, dialogue with the beings that inhabit it. Master Hodgson therefore goes to the main source of branch worldview: his elders, that oral heritage in which time stops and the past, present and future coexist harmoniously to give way to an immemorial reality where natural and supernatural beings are able to communicate, sharing with them the mediambiente and natural resources.

The river, lagoon, sea and forests are for the Rama people the reasons for their beliefs, symbology and life practices. And that is where Rama mythology is built, a mythology where there are no human heroisms, but a mother nature that saves, where animals save and communicate horizontally. "This explains why branches sing to nature and animals. They are inspired by the beauty of nature and at no time on people or characters," explains the illustrious master.

The identity of this people, identified in the communities under study, is focused on nature, from which they take their simplicity in dress, their ways of relating to the environment and other cultures; from which comes his spiritual energy and healing, through the power of plants, from all evils.

However, Professor Hodgson's concern is that the branch ethnic group is constantly threatening. Modernization processes and invasion of their territories are increasingly re-eding them into the forest. Moreover, "There are not many studies and compilations on the myths and legends of the branches. Beliefs are not written and it is an aspect to consider for teaching-learning among the people themselves. The implementation of a research project that strengthens the cultural identity of the same people," suggests the IPILC coordinator at Bluefields, where some branch settlers sometimes glimpse, but which almost no one recognizes.

The Rama people are the best guardian of the forests. He has respect and fear for nature. This research by master Selvano Hodgson represents a valuable effort, not only to publicize the worldview of this labrious people and archive it (as is typical of Western influence) to possess records of the past, but to revitalize it, to rescue its cultural, identity and linguistic values. Still, Professor Hodgson seems to communicate, we can rescue her and prevent her from disappearing.