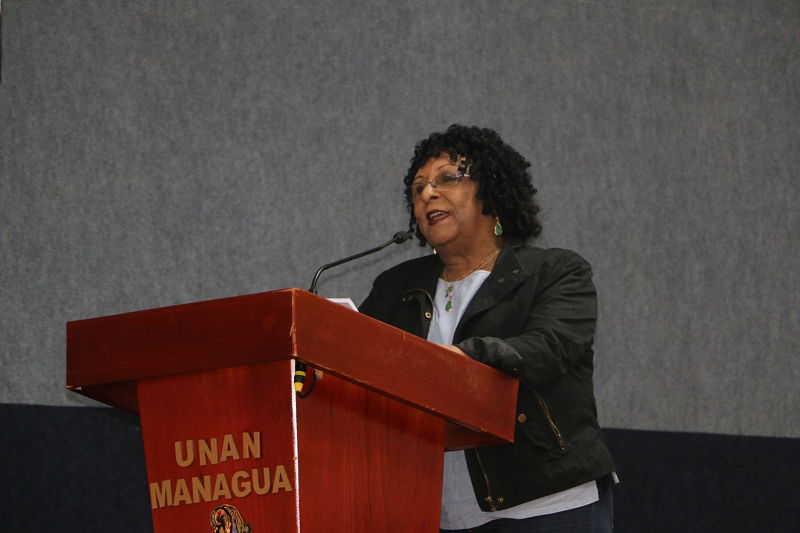 A path that is collectively weeded from diversity and respect

Within the framework of the XII Central American Congress of Anthropology, held at the National Autonomous University of Nicaragua (UNAN-Managua), organized by the Central American Network of Anthropology, developed from 11 to 14 November 2019, in the Rubén Darío Campus (RURD), of this house of higher education, Dr. Alta Hooker Blandford, rector of URACCAN, provided the Master's Conference "Interculturality: A Proposal for the Sustainable Human Development of Native and Afro-Descendant Peoples".

In the international meeting, he had the participation of intellectuals, leaders, leaders and students of Anthropology in its various branches, dosing the exchange of the word and socialization of diverse knowledge from a diverse Central America that dreams and aspires to the integrity of the isthmus from its different dreams and longings.

"Latin America and the Caribbean, it is a meeting of peoples and cultures", initiated the rector Hooker, the master conference, highlighting that according to ECLAC data describes that today there are "42 million indigenous people and 123 million Afro-descendants living in the region, making this a mosaic of cultures, knowledge, does, feelings, traditions, values and a different way of seeing and living the world".

Indigenous and Afro-descendant peoples are a hotbed of ancestral knowledge who walks the word accompanied from their ancestors who contribute to the strengthening of their worldviews and identity rooted from their own identity and the feeling of the need to build a better world in diversity.

A knowledge from spirituality

In the midst of the wealth that weeds the good walk of multiculturalism, which departs from one's own and ancestral knowledge, knowledge and deeds walk with the accompaniment of the elders, wise and wise who show the way to continue the struggle for integrity and inclusion.

"We are like peoples, heirs of ancestral knowledge learned from grandparents and grandmothers, who have served us to live and stay in time. We build our houses and territories with our own regulations. We're cured by traditional medicine. We practice our languages and spirituality so that we can walk the word as a fundamental part of community life," Hooker Blandford stressed.

Over the years, the different states and countries of the world have been adopting and promoting measures that contribute to the exercise of the does from their own thought and from the self-determination of peoples.

"It is meritorious to recognize the adoption of various legal, national and regional instruments that recognize the existence of a diverse, multi-ethnic, multilingual, multicultural Latin America, as well as statements affirming the wide dissemination of humanity's culture and education for justice, freedom, interculturality and peace," he added.

The rector also stressed that "to address the needs of indigenous and Afro-descendant peoples, in 2000, the 189 Member States of the United Nations agreed to achieve 8 purposes that they agreed to call: Sustainable Development Goals; a call that is universal to take action and end poverty, so that it can protect the planet."

It further acknowledged that this comes to "ensure that all people enjoy peace and prosperity, where indigenous peoples are mentioned 6 times, even in two of the 17 objectives, in target 2.3 talks about hunger and food security; and target 4.5 on education, however, requires a significant transformation of all systems because inequalities still persist, inequities, conflicts and difficulties persist in understanding and inclusion, and homogenizing and colonizing national imaginaries are still developing. Own valuation approaches and contributions to the construction of intercultural citizenships that need real and effective dialogue spaces are required for this to be achieved."

Today more than ever Latin America and the Caribbean, mainly its peoples, demand profound changes to the traditional way of looking at and addressing science, knowledge, wisdom and development.

Interculturality as an approach to rights

Interculturality is an element of interaction, relationship, respect and mutual understanding as it shows a route that builds roads and bridges for the sake of collective construction that brings and consolidates the Good Living of peoples in diversity and community.

"In this context, including interculturality as the basic elements of different systems implies that cultural diversity is assumed from a perspective of respect, of social equity, from a perspective that all sectors of society must assume towards others. This perspective has to start from the premise that all cultures have the right to be developed and to contribute from their particularities and differences to the construction of all countries and our nations," stressed the rector.

And he reflected that "interculturality must help us to build those equitable and dialogical relationships that we dream and aspire to with people of different sociocultural traditions, perhaps this is the most important and difficult level of work, knowledge and value of others, but especially develop an attitude of recognition and respect for their rights, that is a challenge for all" , strengthening and emphasizing in a particular way that "interculturality must be a process in constant construction, with establishments and strengthening of spaces of dialogue, communication and horizontal interaction of two ways between peoples, communities and peoples of different cultures where the governance and value of the word play a fundamental role", he concluded.