Skip to main content
Experiences and coverages from intercultural communication on the North Caribbean Coast: the case of Bilwi 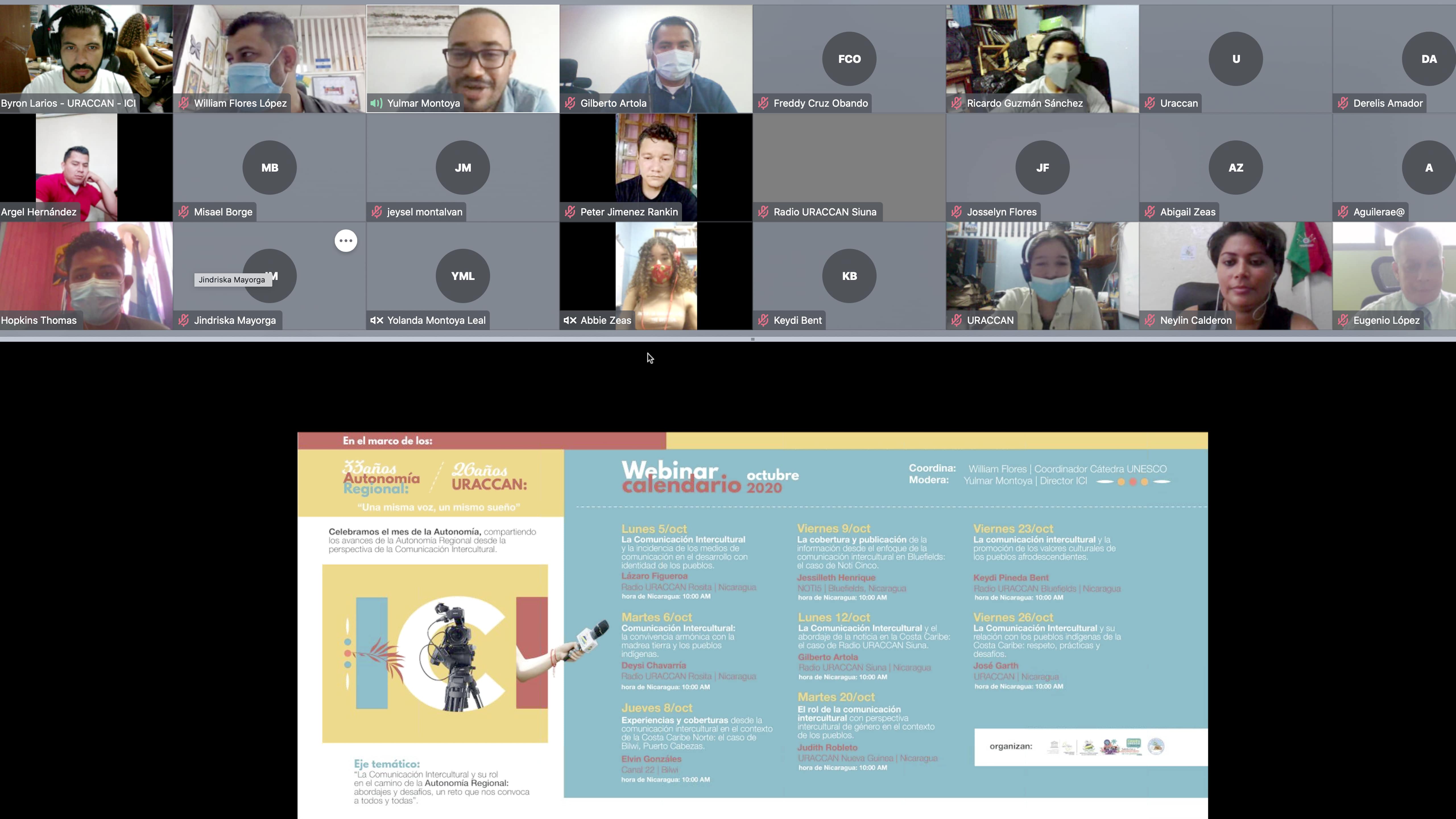 URACCAN's community radios and Channel 5 promote the culture and autonomy of the peoples of the Caribbean Coast.

In Regional Autonomy Month and 26 years after the founding of URACCAN, the direction of the Unesco Chair: "Wisdoms and Knowledge of Peoples" and the Institute of Intercultural Communication (ICI) invited the communicator Piter Jiménez Rankin, of Canal 22, to share his experience of the work of information and education from an intercultural perspective in Bilwi, Puerto Cabezas , as well as in their municipalities and communities.

The webinar, moderated by ICI Director MSc. Yulmar Montoya, was constituted in a space of exchange and dialogue on the exercise of communication in the multicultural, multi-ethnic and multilingual context of this region of the Northern Caribbean of Nicaragua. According to Piter, Channel 22's contribution to strengthening the autonomy of indigenous peoples lies in the incorporation of their cultures, languages and traditions into their programming.

For this purpose, Channel 22, whose slogan is "Voice and Image of Autonomy", works on a bilingual intercultural education (EIB), which a model proposed by different indigenous activist groups throughout Latin America, where the themes of communities are studied in their own language. In the case of this medium in Bilwi, the various programmes developed are rooted in the Autonomy Regime and the visibility of the different territorial governance processes, as well as in the main demands of the ethnic population.

Since that commitment, many of the Broadcasts of Channel 22 are made in miskito, Mayangna and Creole, but also in Spanish, to reach the entire population. Through the coverage of different content of interest of Bilwi society, Regional Autonomy is promoted, with emphasis on the protection and preservation of natural resources, the exercise of the rights of peoples, the projection of their myths and legends, as well as their festivities and gastronomies.

For Piter, the biggest challenge facing the media in the Caribbean region is self-sustainability, especially when programmatic grills are focused on indigenous cultures and have informational and educational purposes as a priority, arlier than commercial ones.

Like URACCAN's Community Radios and Channel 5, Channel 22 has seen the importance of sport within Caribbean society. For this reason, they broadcast their baseball or other sports that are of interest to them, especially when there are teams that represent them, both in regional, national and international leagues. Hence, the peoples of the Caribbean Coast appropriate these intercultural means and feel represented.

The webinar concluded with enthusiastic interventions, contributions, suggestions and proposals to continue to enrich the articulated work that local media have been working to promote the rights and cultures of the Caribbean Coast.